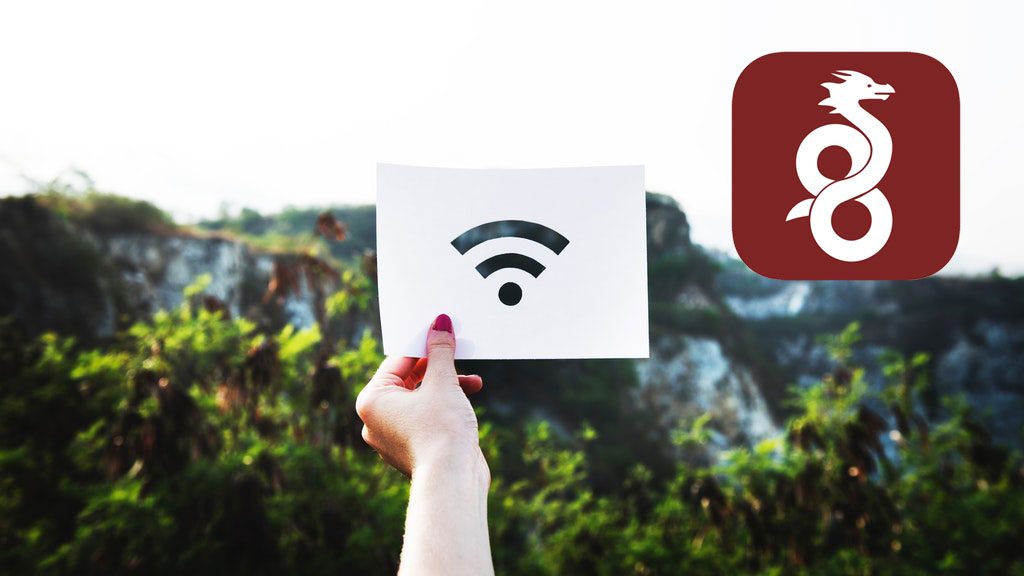 WireGuard is an open-source VPN protocol comparable to OpenVPN, IKEv2, or IPSec with some key differences which have led the creator and lead maintainer of Linux, Linus Torvalds, to praise the technology as a “work of art.” That’s high praise from Torvalds, who is known to have a blunt streak when it comes to assessing open-source code proposed to be merged with the Linux kernel.

On desktop & server distributions of Linux, WireGuard is built into the heart of the operating system as a kernel module, meaning it has a much lower memory overhead compared to conventional VPN protocols like OpenVPN, which run in user space. WireGuard also boasts other desirable security & performance characteristics. The protocol can maintain a connection even as a user roams between Wi-Fi access points and cellular networks – preventing irritating and security-compromising disconnects.

WireGuard servers are stealthy by design; they do not respond to unsolicited packets unless the client presents the server’s public key. This makes it more difficult for adversaries to probe an endpoint to determine if it is running WireGuard. Furthermore, WireGuard is a “quiet” protocol that aims to minimize the bandwidth overhead (e.g. keep-alive packets, symmetric key rotation) required to maintain a secure state when the tunnel is not transmitting data.

At just 3,900 lines of code, WireGuard leverages much more modern cryptographic ciphers compared to old-guard protocols like OpenVPN, which weighs in at 30 times the number of lines of code. This simplicity makes WireGuard much quicker for a cryptographic expert to audit, as well as for the open-source community to identify & correct security weaknesses.

The benefits stemming from the design of WireGuard are not just theoretical. Have you ever been tempted to use a public Wi-Fi network without a VPN to conserve your battery life or avoid slowing down a sluggish connection further? With WireGuard, you will no longer have to make these compromises so you can protect your privacy & security every time.

Setting up a new WireGuard connection is similar to generating & authorizing an SSH key to connect to a Linux server, a routine activity any sysadmin is accustomed to. The WireGuard command, wg, is used to generate a base64-encoded 256-bit public and private key pair for each peer connected to a WireGuard tunnel. The public keys identifying each peer, as well as the connection parameters are exchanged out-of-band prior to establishing a VPN session.

Like any new technology, there are of course, drawbacks that don’t make WireGuard the right tool for every situation. The WireGuard protocol does not have the capability to assign unique IPs to each peer through DHCP. Therefore, address allocations must be managed manually to avoid any IP conflicts. Also, WireGuard supports UDP only, not TCP — Although UDP is usually recommended for VPNs based on performance considerations, TCP VPNs may facilitate more reliable data transfers over slow or unstable connections.

Also, another problem that is particularly troubling for commercial VPN operators is how WireGuard must keep a record of each peer’s connection IP address to negotiate a connection. Many users turn to paid VPN services for enhanced privacy & anonymity, so logging their unmasked IP address is a non-starter for all the companies swearing by their “no logging” policies.

AzireVPN, a Swedish VPN provider among the first to provide a paid VPN service incorporating WireGuard, asked the creator of WireGuard himself to develop them a rootkit module that makes it non-trivial for the operators to observe the client’s’ unprotected IP addresses. This protects the operator from being coerced by any authority to give up server logs that may correlate a VPN user with their real-life identity (through their payment method). If other VPN companies wish to adopt WireGuard, they will likely have to adopt similar mitigations to prevent compromising their users’ privacy.

For site-to-site VPNs and road warriors accessing their corporate network though, WireGuard might be exactly what the doctor ordered. With these applications, anonymity is not the goal, but securing the data travelling through the tunnel using encryption is. Although WireGuard is still pending a security audit and considered experimental for mission-critical applications, it has already been formally verified by some cryptographers.

No security software is guaranteed to be “bug free”, as evidenced by the “replay attack” vulnerability recently revealed in the Cisco AnyConnect, F5 Edge Client, and Palo Alto Networks GlobalProtect VPN clients by the US Department of Homeland Security CERT. Gaping security holes can go unnoticed for a long time in proprietary software, or worse, deliberately introduced by governments & intelligence agencies to eavesdrop on their users.  The WireGuard protocol is 100% open source, as are the Linux, Mac OS, Android, and iOS clients. Currently, the Windows client TUNSafe is developed by a third-party developer and parts of it remain closed source, so users download it at their own risk.

If you want to try WireGuard before it is more broadly deployed, you can create your own WireGuard VPN for surfing, using an inexpensive virtual server with a cloud provider such as Linode. The plan starting from $5/mo with 1 CPU and 1GB RAM is sufficient for several connected devices. Any other cloud provider supporting full/paravirtualization, IPv4 forwarding, and custom kernel modules is supported, but going with Linode is significantly less expensive than using AWS for anything more than an experiment. Even Linode’s most inexpensive plan includes at least 1TB outbound bandwidth, whereas AWS charges $0.10/GB after the first 15GB (for the first year, on the free tier).

For this tutorial, we use a CentOS 7 image to install and configure a WireGuard server, then connect a Linux, Mac, Android, and iOS client (Windows coming soon).

Then, click “Linodes” on the left sidebar of the Linde Manager to begin deploying your WireGuard instance.

Connect to the server by SSH as root and do an initial yum update.

Next, add the WireGuard YUM repo to the server and install the packages.

Make a note of the server public key as you will require it to set up the WireGuard clients later. All WireGuard public and private key strings end with an equals “=” sign.

In the graphical clients, you can generate a public & private key pair with one click (or tap). Record the public key string and email it to yourself, to copy and paste it into the [Peer] block of the server configuration file.

Mac: From the WireGuard icon in the system tray, select “Manage tunnels.” Click the “+” button from the list and “Create empty tunnel.” The public key will appear in a dialog. Keep this window open to finish the client configuration once the server is up.

Android: Launch the WireGuard app and click the “+” button, then choose “Create from scratch.” Click “Generate” beside “Private key” and the public key will appear in the line below. Keep the app open to finish the client configuration once the server is up.

iOS: Launch the WireGuard app and click “Add a tunnel” then choose “Create from scratch.” In the configuration screen, click “Generate keypair” and the generated public key will appear in the line marked “Public key.” Keep the app open to finish the client configuration once the server is up.

It is imperative that each peer is assigned its own unique IP address within the tunnel. A /24 subnet can support a maximum of 255 clients, and each /32 address represents a single IP address.

Save and close the file once done. For further changes to wg0.conf in the future, ensure you bring the wg0 interface down with wg-quick down wg0 first; otherwise your changes can be overwritten automatically by the configuration script.

Setting DNS to the public IP address of the WireGuard server is very important to prevent DNS leaks. Otherwise, DNS queries will be handled locally by the client’s local ISP (a breach of privacy) instead of forwarded to the WireGuard server to perform lookups on its behalf.

You can check that DNS is not leaking by connecting to your WireGuard VPN and using a tool such as DNS leak test. If configured correctly, the results should show the IP address and provider of your VPN server, not your ISP nor a third-party DNS service (e.g. Google, CloudFlare, OpenDNS). 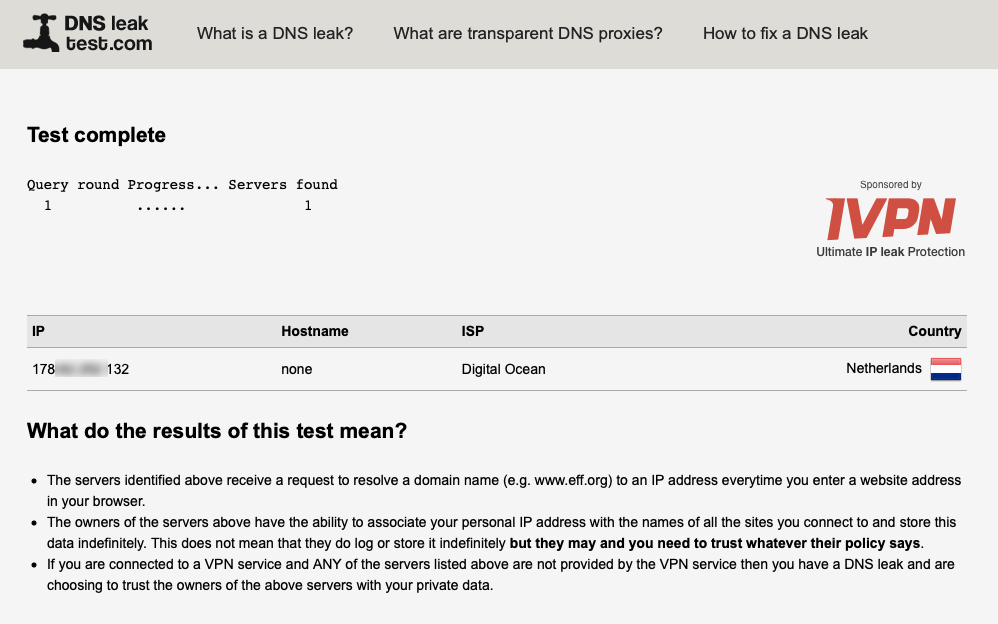 Here, AllowedIPs = 0.0.0.0/0 means you wish to forward all network traffic from the client through the WireGuard tunnel – a typical configuration for a VPN used to encrypt your Internet activity and mask your IP from prying eyes.

PersistentKeepalive = 25 means the client will perform a handshake with the WireGuard server every 25 seconds to keep the connection alive when it itself is behind a NAT (such as a home router). 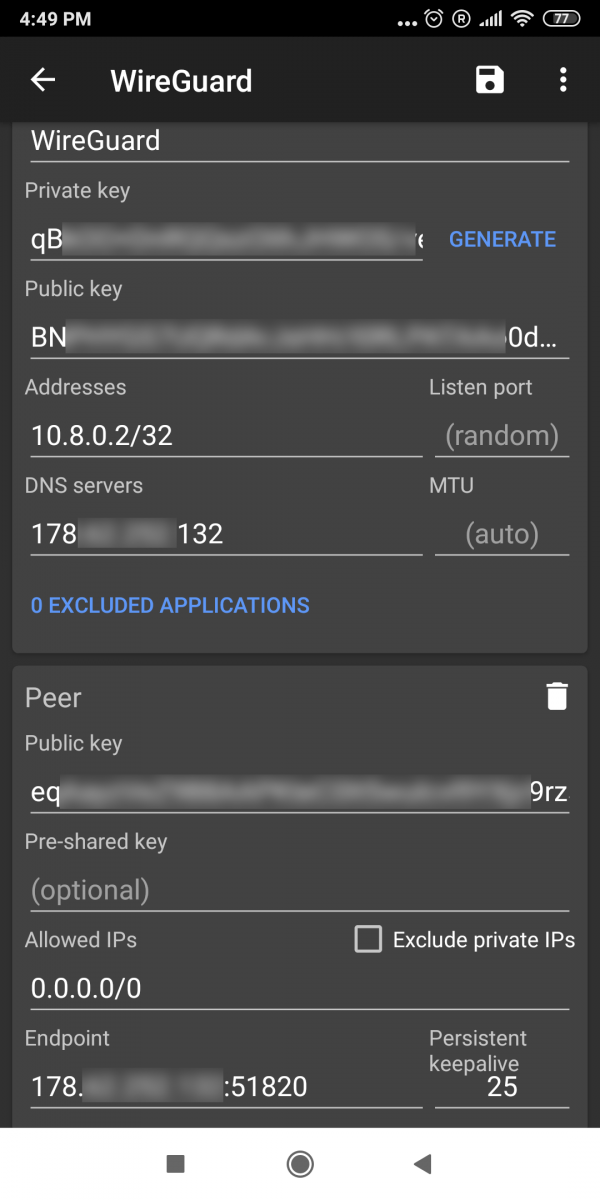 In the future, we will publish articles exploring how to use WireGuard within your cloud infrastructure to set up a point-to-point or site-to-site VPN. Like other VPN protocols, the use cases for WireGuard are not simply limited to secure Internet surfing. It is a versatile tool that can be used to encrypt traffic internally between your servers, or act as a link between two networks (over an untrusted network such as the Internet).