Minio is a S3-compatible object storage server which can fulfil the storage requirements of your cloud native applications. Any application supporting S3 API calls is compatible. For example, you could use a Minio server to create backups, serve static assets through a CDN, store image/file uploads for RocketChat, and much more.

As a containerized application, Minio can be deployed across a Docker Swarm with up to 32 servers in distributed mode. With Minio Erasure Code, your data is protected as long as N/2 nodes are healthy, and write operations require only a minimum of N/2+1 nodes to be online. Minio Erasure Code is a hardware accelerated, SIMD implementation of Reed Solomon code, using high speed HighwayHash checksums in Go (up to 10 GB/s) to prevent “bit rot”, also known as silent data corruption.

Compared to RAID that can only tolerate one (RAID 5) or two (RAID 6) drive failures within an array without data loss, Minio provides a superior solution for durable object storage. Damaged files can be “healed” on an individual basis, compared to the hours or days it can take to rebuild an entire RAID array.

Minio as an API Gateway

If you use an object storage service such as Azure Blob Storage, Google Cloud Storage, or Backblaze B2, Minio can stand between your S3-compatible app, converting its API calls to ones that are compatible with your storage provider of choice – with no code modification needed. Using Minio can be an excellent way to migrate your applications from AWS, save over 75% on your object storage costs (Backblaze B2 compared to Amazon S3), or even connect cloud apps with your on-premise NFS storage cluster. 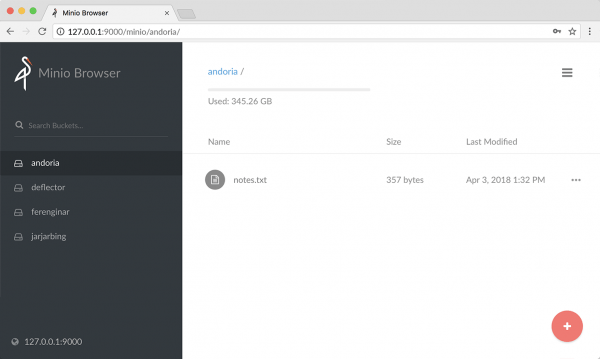 Minio provides developers choice how they’d like to interact with their object storage server. They can either use the Minio SDK, Minio Client, AWS SDK, or AWS CLI. The web based object browser allows uploading and browsing of files in a user-friendly interface.

Client and Server-Side Encryption of Data

Security is a key reason why enterprises would want to host their own object storage server. Minio provides support for client and server-side encryption of data, using secure ciphers including AES-256-GCM, ChaCha20-Poly1305, and AES-CBC. Minio makes it possible to provide an S3 compatible service to developers familiar with the AWS SDK, without the privacy & security risks of using the public cloud.

Deploy Your Own S3-Compatible Cluster