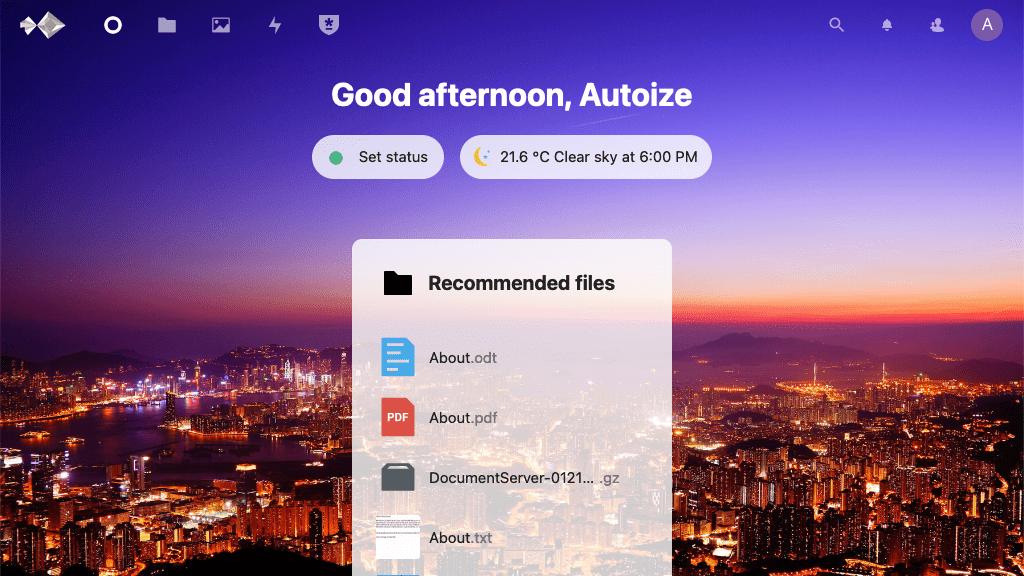 Nextcloud 21 is the most significant update to Nextcloud in several major versions, building upon the introduction of the Nextcloud Hub in version 20. Version 21 brings a couple of new features to the frontend, including a new Whiteboard app, in addition to improvements to the Text, Talk, and groupware apps.

The Nextcloud Whiteboard app is similar to the whiteboard feature in Zoom or Skype for Business, allowing participants to brainstorm or make notes together using text, lines, and shapes. Like other documents in Nextcloud, whiteboards can be shared with other users for collaborative editing, but have the additional benefit of being able to share & edit them (in real-time) during Nextcloud Talk calls.

Author colors and document templates, inspired by Google Docs, have been added to the Text app. It’s easier to identify which changes a user has contributed to a document. There are a few included templates for meeting notes, invoices, and slides, and you can also save and share your own.

The Talk app adds a multitude of features including read receipts, group and public chats, push-to-talk, and improved bridges with IRC, Slack, and Microsoft Teams, in addition to performance optimizations under-the-hood that reduce client-side CPU usage for video conferencing.

Despite these optimizations, the Talk High Performance Backend (open sourced since May 2020) is still recommended for calls with more than 5 concurrent streams to offload the resource-intensive processing of video streams to a separate server from your primary Nextcloud instance. We discuss more about that in the following section aimed at Nextcloud server administrators.

New system requirements for Nextcloud 21 – For system administrators, especially upgrading from a previous version of Nextcloud, there are some major backend updates to be aware of. Starting with Nextcloud 21, support for PHP 7.2 and MySQL 5.7 (or earlier) has been dropped. This means that upgrading to PHP 7.3 or better (PHP 8.0 recommended) and MySQL 8.0 is required for the Nextcloud 21 update.

2X better frontend responsiveness – Nextcloud 21 represents a rewrite of modules including LDAP integration and object storage, for up to 2X better responsiveness during routine, day-to-day usage of the app. Many long-running database queries have been refactored to reduce the load on the server, allowing administrators to support an increasing number of users and volume of data stored using their existing hardware.

For organizations using the open source version of Nextcloud without a subscription, the Talk High Performance Backend must be built and configured from the Github repository. The STUN/TURN service is usually deployed on the same machine to facilitate transversal of corporate firewalls and NAT where users share a public IP address behind a home/office router. Our infrastructure services team can set up Nextcloud Talk, the spreed High Performance Backend, and coturn TURN server adjacent to a brand-new or existing Nextcloud server, and benchmark it using the included tool for your expected number of users.

90% fewer client-server connections, 10X better scalability – Previously, Nextcloud relied on the sync clients to poll the server every 30 seconds for new files, shares, and notifications, which accounted for 90% of the connections to the Nextcloud server. While this might not be as much of an issue for individual home users of NextCloud, it was a huge burden on the server performance for larger deployments. Nextcloud can now scale up to 10X more easily, since this major bottleneck has been eliminated.

Push notifications for sync clients – With the newly introduced support for push notifications in Nextcloud 21, users will be notified of shares and Talk messages from their colleagues more rapidly than before, making collaboration more seamless than before. The requirements for Client Push are having Redis setup for Nextcloud, and a TLS reverse proxy to encrypt the contents of the notifications, and avoid exposing an additional port to the Internet.

Note that installing the Client Push app from the Nextcloud administration panel is not sufficient to enable the Files High Performance Backend; additions must be made to your server’s systemd services, as well as its Nginx or Apache configuration. Depending on how your Nextcloud server was installed in the first place and whether it is a single-server installation or a multi-server cluster, the configuration can significantly differ. As experienced consultants for Nextcloud, we can assess your setup and advise how to configure Client Push for optimal performance and security.

Nextcloud remains the most popular self-hosted cloud storage & groupware solution that can be deployed on any compatible environment including the cloud, or on-premise at an organization’s offices or datacenter. For more information about Nextcloud or any of the other apps we support, please leave us a message and one of our open source application consultants will reach out to you.

Autoize LLC is not an affiliate or partner of NextCloud GmbH, the developers of NextCloud. We are an independent company providing consulting & support for the open-source, community edition of NextCloud.